Auditors slam Sky and Space, possibly the most hated company listed on the ASX

Having been in a voluntary trading halt since last trading on 3 April 2019, shareholders of Sky and Space Global (ASX: SAS) may finally have some closure with signs now pointing to the Israeli-based space company being put into administration.

Earlier in the year, we brought attention to the series of capital raises undertaken by Sky and Space, of which funds raised failed to deliver shareholders any returns.

But with the Company having again proposed a capital raising exercise to continue its operations, Sky and Space finally received an Interim Stop Order from the Australian Securities and Investments Commission (ASIC), halting the proposed $15.8m capital raise in its tracks.

Of concern from regulatory body was the Company’s omission of audited accounts which would have highlighted a dire financial situation.

The Company today released their 2019 Annual Report where the Auditor’s Independent Report raised serious concerns into Sky and Space’s operations – something shareholders have been voicing since before the series of voluntary trading halts commenced. 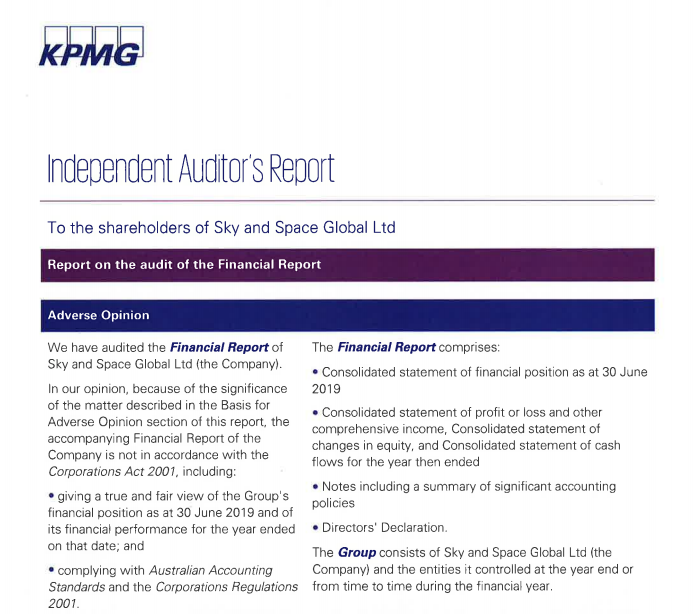 Also identified within the Annual Report was the $1.65 million paid to Directors in salary and consulting fees, including $527,710 to CEO and Managing Director, Meir Moalem.

This however was a significant saving for the Company which had previously spent $8.4m on Key Personnel Remuneration in FY18.

Latest posts by Alfred Chan (see all)
Copyright © 2020 The Sentiment. All rights reserved.